For this project, we followed the AIGA Iowa – ALLCAPS Call For Submission as our prompt. Therefore, we needed to create something (it’s always a non-specific something) with type exemplifying what we resist on a daily basis.

I had a hard time thinking about a specific word I wanted to work with, but after going over some of the last works I’ve done, specifically my BFA Exhibition and my Project 1 for 511, where both talk about money and consumption, I decided to use the word CONSUMERIST to answer the prompt. (FUN FACT -lol- since my BFA show I’ve been having a hard time buying clothes so consumption is something I’m resisting.)

After this insight, I started to develop this idea.
But now the question was “what am I gonna do?”
I really liked the Project 1 feel of alien abduction/old tv signal/psychedelic imagery and I wanted to explore that a little more.

To start getting some ideas flowing I went to some websites of fast fashion retailers (H&M and Forever 21) and bigger online stores as well (Dolls Kill and Nasty Gal), where I noticed the use of Blackletter as a design element in many of the pieces. I first noticed this trend on Taylor Swift’s new album cover and after going through some clothing websites I could see that this is a current trend.

After deciding that I wanted to work with a Gothic typeface, how could I make it relate to consumerism? For this to happen I started to think about the dollar bills and one of the things that sparked my interest was the 100 dollar bill because it has a strong cultural connection to Americans (people know who is in it – Ben Franklin – and are able to recognize it even if small pieces of it are shown).

So I decided to merge the gothic typeface Old English Text MT with the striking eyes of “Ben” to give the word Consumerist a judgemental stare.

After some troubleshooting and messing with different positioning of the image inside the letters I decided to select the most striking features of the bill and distribute it through the word.

After creating the type I started working on cropping the image. At this point, I went on to brainstorm ways to take it out of the computer in an interesting way. Since one of the parameters of the prompt was that it couldn’t only be “ink on paper” I decided to transfer the design to a t-shirt. 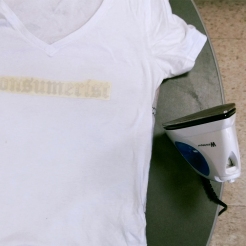 The learning curve was steep, as I burned a t-shirt on the first try (oops) but I was able to test it out a couple times and came up with a good final result. (Tip #1 – always test out new techniques and materials before going for the final piece)

However, just the t-shirt wasn’t enough for me. I needed to push it further. This is where the alien abduction/psychedelic imagery comes to play. I decided that my final piece would be an unsettling psychedelic video merging still images, lettering, video, and music together.

I chose the song “Cold Step,” available on YouTube’s creator studio as well as recorded sounds of my voice and noises created by shopping bags, paper, packaging, and receipts.

For video and images, I went to a store with my GoPro propped on the edge of my purse so that I could manipulate the merchandise as I went. I also took pictures of myself wearing the T-shirt and used textures from receipts and crinkled paper I scanned to create the different overlays in the video.

To edit it, I used PremierePro. I wanted to explore the different combinations of effects and how to achieve certain looks. Tutorials were of great help.

I believe I achieve the objective to create a disturbing ensemble that showcases the work I did with the word consumerism as well as exemplifies it in an obvious and exaggerated way.

Published by Vitoria, no C